This page was created for the 2010 USGO and to help with renovation fundraising.
We keep it up for the history.
Help us recognize the birthplace and “clubhouse” of the first openly gay tennis organization in the world.

To celebrate three decades of the first openly gay tennis group in the world—the GLTF—and the 30th anniversary of the first openly gay tennis tournament, the United States Gay Open (USGO), the GLTF has undertaken a project to immortalize the founding site of the GLTF, the 15th Street public tennis courts in San Francisco. This renovation will not only help to improve the condition of these courts for the community, but will:
Just as the GTF did back in 1981 — more than 30 years ago — we would like to resurface the courts to mark a new chapter in our history. As the gathering spot for this community, we plan to extend the on-court bench to welcome more members of our community with a picnic area, rest rooms,

a water fountain and informational kiosk. We plan to build upon our past with plaques memorializing our history on the court walls. With improved gardens, spectacular vistas, and amazing tennis, who could ask for a more impressive commemoration of the past and a more fitting “clubhouse“ at which to stage our future? Click here to watch a video of our plans as well as interviews of current and founding GLTF members. The fiscal agent for the project will be San Francisco Parks Trust a 501(c)(3). With your help, we can realize the dream and reinvigorate the GLTF for another 30 years.

Commemorating GLTF’s humble origins
The very beginning
On these courts evolved what came to be known as the “Mecca of Gay Tennis,” the Gay Tennis Federation (now the GLTF) and the USGO. And from the GTF sprang many other gay tennis groups around the world and the formation of the international Gay & Lesbian Tennis Alliance. These courts are ground zero of the gay and lesbian organized sports movement and for decades have provided a safe, comfortable, and sometimes competitive environment for local tennis players.

Securing its place in the GLBT struggle
The early ‘80s were a time when the AIDS epidemic started claiming thousands of lives and the gay community realized that a healthy, active outlet was needed to nurture the community. Gay sports provided that vehicle and the GTF became one of the largest organizations of its kind.

Back on July 17, 1980, The Gladiator, San Francisco’s first gay sports newspaper, included Les Balmain’s call to the gay community to create the Gay Tennis Federation with an invitation to come to the 15th Street tennis courts. Two days later, 13 players showed up for a beginners’ clinic and set play for the GTF’s tennis ladder. A year later, the GTF had more than 100 members and an active tennis program with a challenge ladder, team tennis league, club championships, and the United States Gay Open national tennis tournament.

Building a clubhouse for the future
Shortly after forming in 1980, the GTF hosted Thursday evening clinics and workouts at the 15th Street tennis courts. In 1981, a founding member, Rod Bradford, started gathering signatures to bring a petition to re-surface the 15th St courts to the San Francisco Parks & Recreation Department. A resurfacing committee was formed in December of that year and by the summer of 1982 the courts were resurfaced. Years later, the GTF dedicated an on-court bench for weary players waiting to play. Even now, every Saturday a GLTF group plays doubles and that bench provides seating for the queue. As a community tennis organization, the GTF has never had a clubhouse, but the 15th Street courts have always been our home.

At the time the GTF formed in 1980, gay tennis groups emerged in Dallas, Houston, Tampa and Los Angeles, with involvement from players who had previously played the USGO or simply were inspired by the GTF. These groups soon started their own national tennis tournaments that grew into a larger collaboration.

After the 1990 Gay Games in Vancouver, Scott Williford of San Diego proposed a concept for an organized international gay tennis circuit. The established gay clubs all jumped on the bandwagon, and at the 1991 USGO, a group of six clubs met to map out a plan for a new organization, deciding to hold elections for a set of officers to run the new “Gay Tennis Alliance” at the San Diego Open July 4th of that year. Scott Williford was voted in as the circuit’s first seeding chair and commissioner, with Gary Sutton of Los Angeles was public relations chair.

In 1992, the GTF started the Gay Tennis Hall of Fame, and the rest is history... 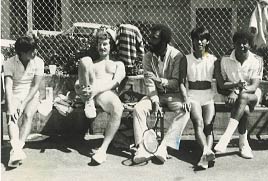 One person's journey perhaps best illuminates the importance the Gay Tennis Federation and the annual United States Gay Open, which was played for years at the Golden Gate Park Tennis Center over Memorial Day Weekend.

Tony Cibrian of Corpus Christi, Texas would save his money so he could attend tournaments, meet up with friends, perform his drag act and be a star just for that weekend before returning to discrimination and an often hostile neighborhood. The USGO was purposely the last tournament he attended before heading home to Texas and passing two days afterward. He didn’t get to play his last USGO or even perform that year, but he got to spend his last days with his gay tennis friends one last time. Tony was determined to feel the safety, love and acceptance that he could not find in his South Texas neighborhood.